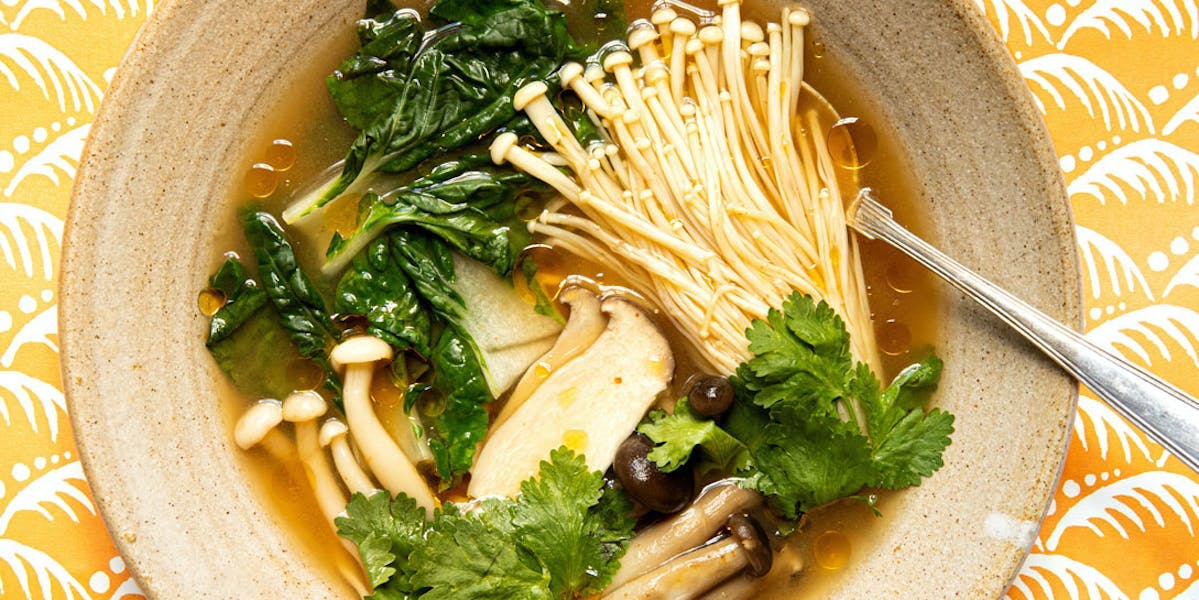 Making a balanced, flavourful, hot and sour Tom Yum is totally within reach. For the nights you're staying in, make this restaurant favourite at home.

Throughout March, April, May and June one of the things I missed the most was eating at my local Thai restaurant. I used to go at least once a week before lockdown, and started every meal with a punchy, savoury and perfectly sour bowl of tom yum soup. I decided to do a little research to see if I could attempt making some of my restaurant favourites at home. I came across an amazing website and blog called Hot Thai Kitchen and binge watched more or less 5 hours of cooking videos in one night. Pailin Chongchitnant is the creator of it, has a cookbook all about Thai cooking and has taught me so much in such a short time. Here are a few lessons I learned from her about making a balanced vegan tom yum that is bursting with flavour.

Flavour wise, what distinguishes tom yum from other soups is what Pailin refers to as the “tom yum trinity”,  which consists of lemongrass, kaffir lime leaves and galangal. Without it, the soup might still taste good, but will be missing the layers of flavour which make tom yum so unique. Although galangal might look similar to ginger, it’s flavour profile is completely different so it’s really worth looking for. I tend to get mine at an amazing Oriental shop called Hing Yip on Holloway Road (in London), but I’ve also found it in a lot of greengrocers I’ve been to. That shop is also where I tend to buy mushrooms, both for this recipe and in general. That brings me to the second important point which is mushrooms. Although button and cremini mushrooms are great in some recipes, they don’t hold up well in soups and don’t contribute a lot flavour-wise. I like to use a mix of oyster, enoki and white beech mushrooms, which have a really satisfying texture and mild yet distinguishable flavour.

Another thing that Pailin emphasises in all her tom yum recipes - whether they are meat, fish or vegetable based - is the need to use good quality stock. As the soup only cooks for around 15 minutes once the aromatics are added, using water alone will make for a bland tom yum. Using a stock cube on the other hand - which tends to include herbs and flavourings - would be too dominating and would drive the flavour away from those aromatics. Making a light stock from scratch allows for depth of flavour to be added which compliments, rather than detracts from the flavour of lemongrass, galangal and kaffir leaves.

Start by making the stock. Add the onion, celery, garlic, ginger, peppercorns, salt and water to a medium sized pot. After simmering the stock for 50 minutes, stir in the white miso. Continue simmering for 5 more minutes. Strain the stock through a fine-mesh sieve and into a large bowl. Set aside.

Add 2 tbsp oil to a pot set over medium heat. Add the shallots and chilli flakes, and cook for 8-10 minutes, until the shallots are starting to brown. In the meantime, prepare the lemongrass, by smashing it with the back of a knife and chopping it into 2 inch pieces.

Tear the mushrooms apart with your hands if they are in large pieces, and add them to the pot along with the greens (if using). Add the soy sauce and brown sugar and simmer for 1-2 minutes.

Stir in the lime juice and taste for seasoning. Add more soy sauce, sugar or lime to taste. Serve topped with fresh coriander.

Valentina is our Food Creative, who dreams up our tasty dishes and recipes for our social channels. She has loads of experience cooking up a storm in Italian kitchens, so it’s no surprise she can’t live without good-quality olive oil (don’t come between her and her olive oil) and fresh pasta.